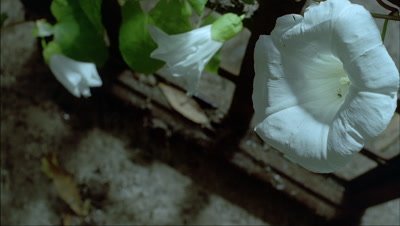 Convolvulaceae (US: /kənvɒlvjʊˈleɪsieɪ/), known commonly as the bindweed or morning glory family, is a family of about 60 genera and more than 1,650 species of mostly herbaceous vines, but also trees, shrubs and herbs, and also including the sweet potato and a few other food tubers. Convolvulaceae can be recognized by their funnel-shaped, radially symmetrical corolla; the floral formula for the family has five sepals, five fused petals, five epipetalous stamens (stamens fused to the petals), and a two-part syncarpous and superior gynoecium. The stems of these plants are usually winding, hence their Latin name (from convolvere, "to wind"). The leaves are simple and alternate, without stipules. In parasitic Cuscuta they are reduced to scales. The fruit can be a capsule, berry, or nut, all containing only two seeds per one locule (one ovule/ovary). Learn more about Morning-glory