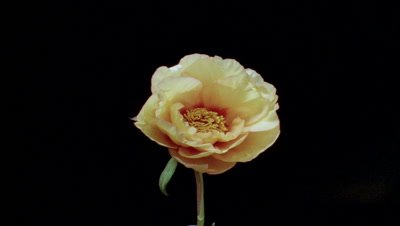 All Paeoniaceae are deciduous perennial herbs or shrubs, with thick storage roots and thin roots for gathering water and minerals. Some species are caespitose (tufted), because the crown produces adventitious buds, while others have stolons. They have rather large compound leaves without glands and stipules, and with anomocytic stomata. In the woody species the new growth emerges from scaly buds on the previous flush or from the crown of the rootstock. The large bisexual flowers are mostly single at the end of the stem. In P. emodi, P. lactiflora, P. veitchii and many of the cultivars these contributed to, few additional flowers develop in the axils of the leaves. Flowers close at night or when the sky is overcast. Each flower is subtended by a number of bracts, that may form a sort of involucre, has 3-7 tough free sepals and mostly 5-8, but occasionally up to 13 free petals. These categories however are intergrading, making it difficult to assign some of them, and the number of these parts may vary. Within are numerous (50–160) free stamens, with anthers fixed at their base to the filaments, and are sagittate in shape, open with longitudal slits at the outer side and free pollen grains which have three slits or pores and consist of two cells. Within the circle of stamens is a more or less prominent, lobed disc, which is presumed not to excrete nectar. Within the disk is a varying number (1-15) of separate carpels, which have a very short style and a decurrent stigma. E... Learn more about Peony