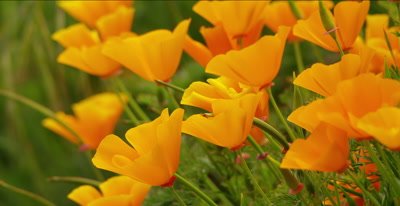 The Papaveraceae /pəpævəˈreɪsiiː/ are an economically important family of about 42 genera and approximately 775 known species of flowering plants in the order Ranunculales, informally known as the poppy family. The family is cosmopolitan, occurring in temperate and subtropical climates (mostly in the northern hemisphere), but almost unknown in the tropics. Most are herbaceous plants, but a few are shrubs and small trees. The family currently includes two groups that have been considered to be separate families: Fumariaceae and Pteridophyllaceae. A poppy is a flowering plant in the subfamily Papaveroideae of the family Papaveraceae. Poppies are herbaceous plants, often grown for their colourful flowers. One species of poppy, Papaver somniferum, is the source of the narcotic drug opium which contains powerful medicinal alkaloids such as morphine and has been used since ancient times as an analgesic and narcotic medicinal and recreational drug. It also produces edible seeds. Learn more about Poppy