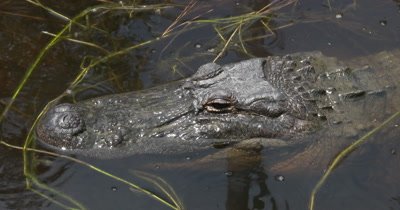 An average adult American alligator's weight and length is 360 kg (790 lb) and 4 m (13 ft), but they sometimes grow to 4.4 m (14 ft) long and weigh over 450 kg (990 lb). The largest ever recorded, found in Louisiana, measured 5.84 m (19.2 ft). The Chinese alligator is smaller, rarely exceeding 2.1 m (7 ft) in length. Additionally, it weighs considerably less, with males rarely over 45 kg (100 lb). Adult alligators are black or dark olive-brown with white undersides, while juveniles have strongly contrasting white or yellow marks which fade with age. No average lifespan for an alligator has been measured. In 1937, an adult specimen was brought to the Belgrade Zoo in Serbia from Germany. It is now at least 80 years old. Although no valid records exist about its date of birth, this alligator, officially named Muja, is considered the oldest alligator living in captivity. Learn more about Alligator