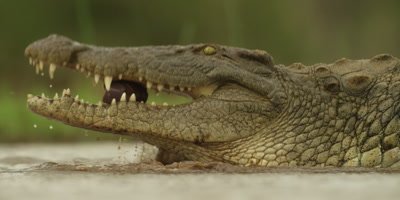 Crocodiles (subfamily Crocodylinae) or true crocodiles are large semiaquatic reptiles that live throughout the tropics in Africa, Asia, the Americas and Australia. Crocodylinae, all of whose members are considered true crocodiles, is classified as a biological subfamily. A broader sense of the term crocodile, Crocodylidae that includes Tomistoma, is not used in this article. The term crocodile here applies to only the species within the subfamily of Crocodylinae. The term is sometimes used even more loosely to include all extant members of the order Crocodilia, which includes the alligators and caimans (family Alligatoridae), the gharial and false gharial (family Gavialidae), and all other living and fossil Crocodylomorpha. Although they appear similar, crocodiles, alligators and the gharial belong to separate biological families. The gharial, with its narrow snout, is easier to distinguish, while morphological differences are more difficult to spot in crocodiles and alligators. The most obvious external differences are visible in the head, with crocodiles having narrower and longer heads, with a more V-shaped than a U-shaped snout compared to alligators and caimans. Another obvious trait is that the upper and lower jaws of the crocodiles are the same width, and the teeth in the lower jaw fall along the edge or outside the upper jaw when the mouth is closed therefore, all teeth are visible, unlike an alligator, which possesses in the upper jaw small depressions into which... Learn more about Crocodile