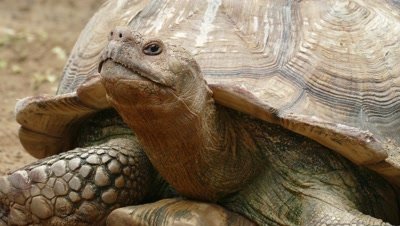 Tortoises (/ˈtɔːr.təs.ɪz/) are reptile species of the family Testudinidae of the order Testudines (the turtles). They are particularly distinguished from turtles by being land-dwelling, while many (though not all) turtle species are at least partly aquatic. However, like turtles, tortoises have a shell to protect from predation and other threats. The shell in tortoises is generally hard, and like other members of the suborder Cryptodira, they retract their necks and heads directly backwards into the shell to protect them. Tortoises are unique among vertebrates in that the pectoral and pelvic girdles are inside the ribcage rather than outside. Tortoises can vary in dimension from a few centimeters to two meters. They are usually diurnal animals with tendencies to be crepuscular depending on the ambient temperatures. They are generally reclusive animals. Tortoises are the longest living land animal in the world, although the longest living species of tortoise is a matter of debate. Galápagos tortoises are noted to live over 150 years, but an Aldabra giant tortoise named Adwaita may have been the longest living at an estimated 255 years. In general, most tortoise species can live 80–150 years. Learn more about Tortoise