The maximum known length of a big skate is 2.4 m (7.9 ft), though this species usually does not exceed 1.8 m (5.9 ft) and 91 kg (201 lb). This species has a flattened, diamond-shaped pectoral fin disk slightly wider than it is long, with a long, moderately pointed snout. The eyes are small and placed just ahead of the large spiracles. The teeth are small with raised cusps, numbering 24-48 rows in the upper jaw and 22-45 in the lower. Two small dorsal fins are on the tail, the anal fin is absent, and the caudal fin is reduced to a simple fold. There is a weak notch in each pelvic fin. A juvenile has smooth skin, while an adult has small prickles on its dorsal surface and the underside of the snout, between the gill slits, and on the abdominal region. It has two or three thorns on the middle of the back, a row of 12-55 (usually 13-17) thorns along the midline of the tail, and an interdorsal thorn. Some older individuals have a thorn above each eye. The back is colored a mottled brown to reddish brown, olive-brown, or gray, with rosettes of small white spots or scattered dark blotches. Two large dark spots with pale borders occur, one on each wing. The ventral side is white, sometimes with dark spots or blotches. Learn more about Big Skate 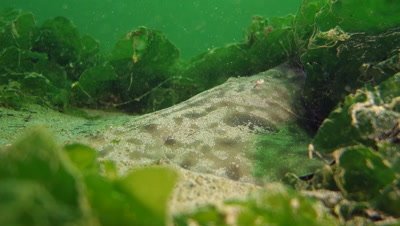 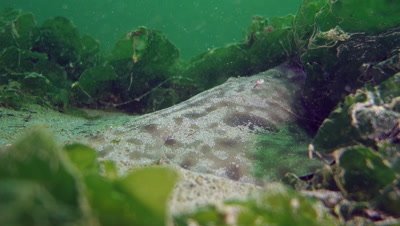 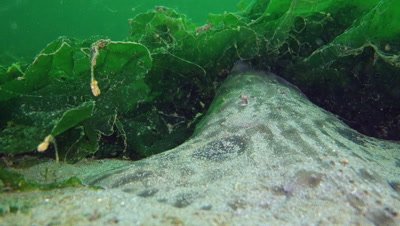 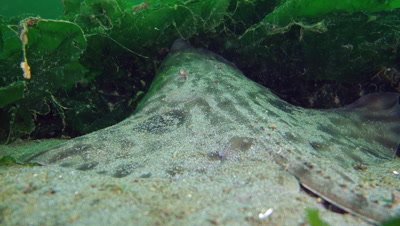 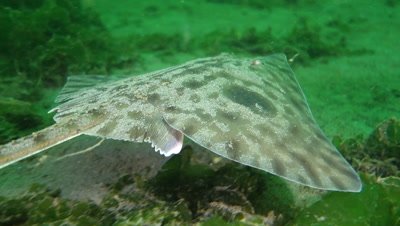