The nominate subspecies of the common tern is 31–35 cm (12–14 in) long, including a 6–9 cm (2.4–3.5 in) fork in the tail, with a 77–98 cm (30–39 in) wingspan. It weighs 110–141 g (3.9–5.0 oz). Breeding adults have pale grey upperparts, very pale grey underparts, a black cap, orange-red legs, and a narrow pointed bill that can be mostly red with a black tip, or all black, depending on the subspecies. The common tern's upperwings are pale grey, but as the summer wears on, the dark feather shafts of the outer flight feathers become exposed, and a grey wedge appears on the wings. The rump and tail are white, and on a standing bird the long tail extends no further than the folded wingtips, unlike the Arctic and roseate terns in which the tail protrudes beyond the wings. There are no significant differences between the sexes. In non-breeding adults the forehead and underparts become white, the bill is all black or black with a red base, and the legs are dark red or black. The upperwings have an obvious dark area at the front edge of the wing, the carpal bar. Terns that have not bred successfully may start moulting into non-breeding adult plumage from June, but late July is more typical, with the moult suspended during migration. There is also some geographical variation, Californian birds often being in non-breeding plumage during migration. Juvenile common terns have pale grey upperwings with a dark carpal bar. The crown and nape are...Learn more about Common Tern 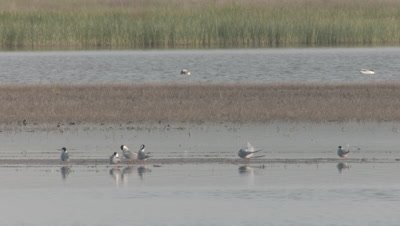