Its grey coat, white belly, and slender physique distinguish them from their cousin, the harbor seal (Phoca vitulina). The monk seal’s physique is ideal for hunting its prey: fish, lobster, octopus and squid in deep water coral beds. When it is not hunting and eating, it generally basks on the sandy beaches and volcanic rock of the Northwest Hawaiian Islands. The Hawaiian monk seal is part of the family Phocidae, being named so for its characteristic lack of external ears and inability to rotate its hind flippers under the body. The Hawaiian monk seal has a relatively small, flat head with large black eyes, eight pairs of teeth, and short snouts with the nostril on top of the snout and vibrissae on each side. The nostrils are small vertical slits which close when the seal dives underwater. Additionally, their slender, torpedo-shaped body and hind flippers allow them to be very agile swimmers. Adult males are 300 to 400 pounds (140 to 180 kg) in weight and 7 feet (2.1 m) in length while adult females tend to be, on average, slightly larger, at 400 to 600 pounds (180 to 270 kg) and 8 feet (2.4 m) in length. When monk seal pups are born, they average 30 to 40 pounds (14 to 18 kg) and 40 inches (1.0 m) in length. As they nurse for approximately six weeks, they grow considerably, eventually weighing between 150 to 200 pounds (68 to 91 kg) by the time they are weaned, while the mother loses up to 300 pounds (140 kg). 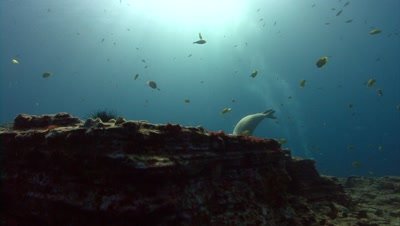 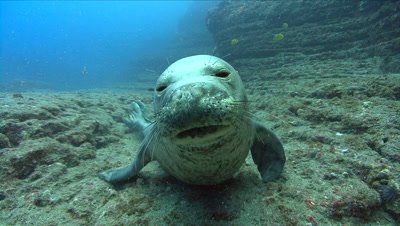