According to the classical hypothesis of Marriosis De' Abrtona, derived from the results of the expedition of the famous British research vessel RRS Discovery, egg development then proceeds as follows: gastrulation (development of egg into embryo) sets in during the descent of the 0.6 mm (0.024 in) eggs on the shelf at the bottom, in oceanic areas in depths around 2,000–3,000 metres (6,600–9,800 ft). The egg hatches as a nauplius larva once this has moulted into a metanauplius, the young animal starts migrating towards the surface in a migration known as developmental ascent. The next two larval stages, termed second nauplius and metanauplius, still do not eat but are nourished by the remaining yolk. After three weeks, the young krill has finished the ascent. They can appear in enormous numbers counting 2 per litre in 60 m (200 ft) water depth. Growing larger, additional larval stages follow (second and third calyptopis, first to sixth furcilia). They are characterised by increasing development of the additional legs, the compound eyes and the setae (bristles). At 15 mm (0.59 in), the juvenile krill resembles the habitus of the adults. Krill reach maturity after two to three years. Like all crustaceans, krill must moult in order to grow. Approximately every 13 to 20 days, krill shed their chitinous exoskeleton and leave it behind as exuvia. Learn more about Krill 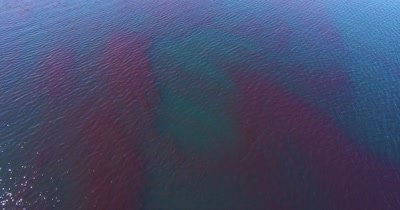