Needlefish are slender, ranging from 3.0 to 95 cm (1.2 to 37.4 in) in length. They have a single dorsal fin, placed far back on the body, almost opposite to the anal fin. Their most distinctive feature is their long, narrow beak, which bears multiple sharp teeth. In most species, the upper jaw only reaches its full length in adults, so the juveniles have a half-beak appearance, with an elongated lower jaw, but a much smaller upper one. During this stage of their lifecycle, they eat plankton, switching to fish once the beak fully develops. Needlefish reproduce through mating and lay eggs. The male usually rides the female on the waves as they mate. Needlefish are most common in the subtropics, but some inhabit temperate waters, as well, particularly during the winter. Belone belone, a common North Atlantic species, often swims in schools alongside tuna. 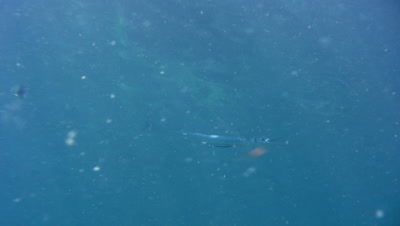