Red-footed tortoises show sex, regional, and individual variations in color, shell shape, and minor anatomical characteristics. Adult carapaces are generally an elongated oval with sides that are nearly parallel, although the sides of males may curve inwards. They are fairly highly domed and smooth with a rather flat back (although the scutes may be raised or 'pyramided' in some individuals, especially captive specimens). Often, a high point over the hips is seen, with a small sloped section over the neck. The vertebral and costal scutes (the scutes along the center and sides of the carapace) are black or dark brown with a pale yellow areole in the center. The marginals (scutes along the edge of the carapace) 'tuck under' along the sides and flare slightly over the limbs. They are dark with the pale aureole along the middle of the lower edge. The nuchal scute (the marginal over the neck) is absent, and the marginals over the tail are joined as one large supracaudal. Growth rings are clearly evident in most individuals, but become worn smooth with age. Their natural habitat ranges from savannah to forest edges around the Amazon Basin. They are omnivorous with a diet based on a wide assortment of plants, mostly fruit when available, but also including grasses, flowers, fungi, carrion, and invertebrates. They do not brumate, but may aestivate in hot, dry weather. 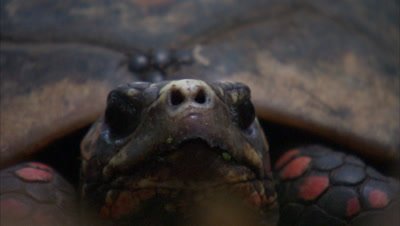 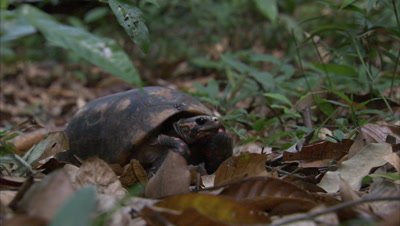