Adult birds are 18–22 cm (7.1–8.7 in) long, span 29–33 cm (11–13 in) across the wings and weigh 35–65 g (1.2–2.3 oz). Grosbeaks measured during migration in the West Indies averaged 43 g (1.5 oz), while those banded in Pennsylvania average about 45 g (1.6 oz). Very little sexual dimorphism in size is seen females were found to be marginally smaller in standard measurements, but in some seasons were marginally heavier than males when banded in Pennsylvania. At all ages and in both sexes, the beak is dusky horn-colored, and the feet and eyes are dark. The adult male in breeding plumage has a black head, wings, back, and tail, and a bright rose-red patch on its breast the wings have two white patches and rose-red linings. Its underside and rump are white. Males in nonbreeding plumage have largely white underparts, supercilium, and cheeks. The upperside feathers have brown fringes, and most wing feathers white ones, giving a scaly appearance. The bases of the primary remiges are also white. The coloration renders the adult male rose-breasted grosbeak (even while wintering) unmistakable if seen well. The adult female has dark grey-brown upperparts – darker on wings and tail –, a white supercilium, a buff stripe along the top of the head, and black-streaked white underparts, which except in the center of the belly have a buff tinge. The wing linings are yellowish, and on the upperwing are two white patches like in the s...Learn more about Rose-Breasted Grosbeak 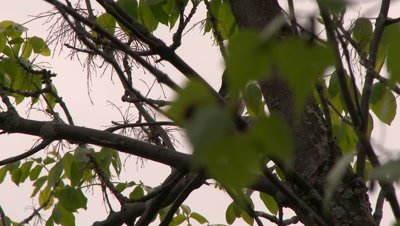 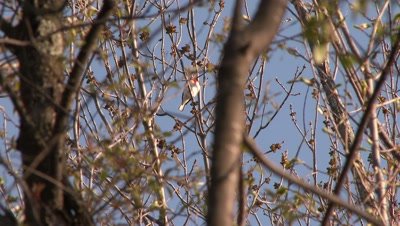 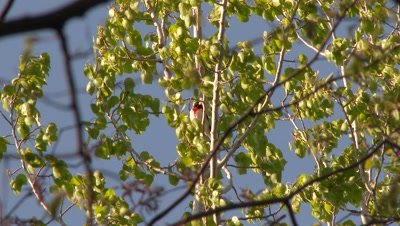