The tiger shark commonly attains a length of 3.25–4.25 m (10 ft 8 in–13 ft 11 in) and weighs around 385–635 kg (849–1,400 lb). It is dimorphic, with exceptionally large females reportedly measuring over 5 m (16 ft 5 in), and the largest males 4 m (13 ft 1 in). Weights of particularly large female tiger sharks can exceed 900 kg (2,000 lb). One pregnant female caught off Australia reportedly measured 5.5 m (18 ft 1 in) long and weighed 1,524 kg (3,360 lb). Even larger unconfirmed catches have been claimed. Some papers have accepted a record of an exceptional 7.4 m (24 ft 3 in) length for a tiger shark, but since this is far larger than any scientifically observed specimen, verification would be needed. Among the largest extant sharks, the tiger shark ranks in average size only behind the whale shark (Rhincodon typus), the basking shark (Cetorhinus maximus), and the great white shark (Carcharodon carcharias). Some other species such as megamouth sharks (Megachasma pelagios), Pacific sleeper sharks (Somniosus pacificus), Greenland sharks (Somniosus microcephalus), and bluntnose sixgill sharks (Hexanchus griseus) broadly overlap in size with the tiger shark, but as these species are comparatively poorly studied, whether their typical mature size matches that of the tiger shark is unclear. The great hammerhead (Sphyrna mokarran), a member of the same taxono...Learn more about Tiger Shark 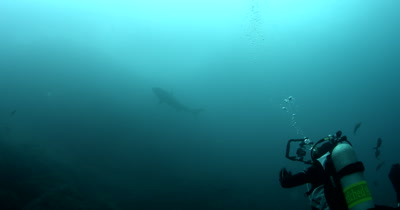