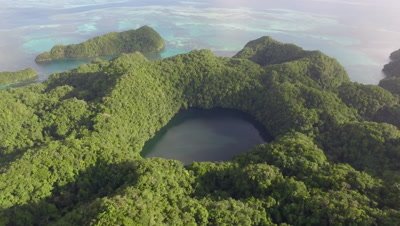 Dream destinations look great from a distance, certainly aerial shots from aircraft or drones with tropical turquoise waters and deserted islands nestled within an atoll tick many boxes in a location scout’s list of desirables. Kayangel Atoll in the north of Palau is one such place and it does look spectacular. The first time I filmed there with my drone I was blown away by the rich colors.

The real story after all is not the superficial but rather what is hidden when you pull back the curtain. This Pristine Paradise isolated by vasts tracts of Ocean is still very much impacted by entities that have neither heard of nor care about this tiny island and it’s inhabitants. It is the aim in the coming months to expose what is behind this postcard curtain so that entities will hear about and know both the beauty of Palau and the threats it faces.

View the Richard Brooks NatureFootage Contributor Profile to view these clips and other footage from his collection.

Richard Brooks is the owner/operator of Lightning Strike Productions a media company based in Palau.